Delhi, September 19, 2022: A high adrenaline race weekend of the JK Tyre presents Royal Enfield Continental GT Cup 2022 concluded at Kari Motor Speedway, Coimbatore on September 16th, 17th and 18th 2022. After three intense races at Round 1 of this unique racing championship, Anish Shetty and Soorya PM lead the championship table with 20 and 36 points under the Professional and Amateur categories, respectively. 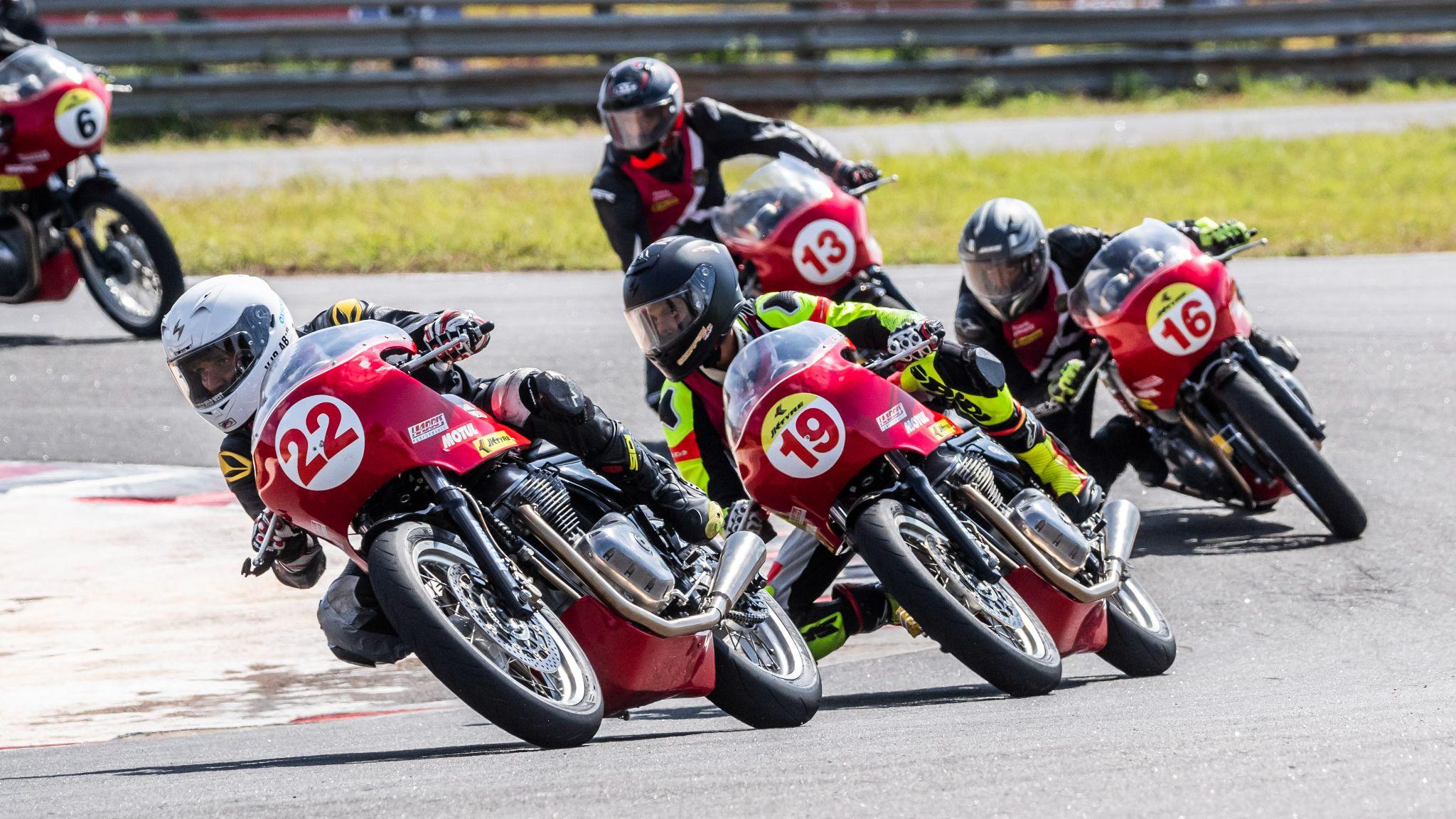 The fight for the podium at Round 1 of the Continental GT Cup Season 2 took the competition a notch higher from last season with 25 racers including 10 professionals and 15 amateurs under this year’s ‘Pro-Am Series’ battling it out till the end. All three races were as varied in competition and racecraft as they were similar in adrenaline and excitement!

In Race 1, Allwin Xavier from Thrissur slipstreamed past Anish Shetty with just 1 lap to go and won the Professional category with a hair’s breadth while Soorya PM from Chennai gave the professional racers a run for their money and topped the maiden Amateur category with an enviable show of talent. Race 2 of the Royal Enfield Continental GT Cup 2022 witnessed an extremely tight lead out of 5 riders fighting for the win. Anish Shetty and Soorya PM dominated the race track and finished at the top of the standings for Professional and Amateur categories respectively. Race 3 saw a well deserved win for Navaneeth Kumar who was in top form, but a close battle ensued behind him between Ullas, Sudheer, Anish and Allwin for the remaining spots on the podium. Navaneeth Kumar emerged as the winner of the Professional category followed by Ullas and Sudheer. In the Amateur category, Soorya PM continued his dominance and emerged as the winner cruising through the finish line with Varun Gowda and Rohan R finishing the podium lineup.

The 25 racers will compete in the remaining two rounds of the Continental GT Cup 2022 scheduled in October and December. Round 2 and 3 will be held between October 28 – 30 and December 16 – 18, respectively at Kari Motor Speedway, Coimbatore.

Royal Enfield has always focused on encouraging and nurturing the culture of Pure Motorcycling for over 120 years. As part of this, the Royal Enfield Continental GT Cup was created to aid accessible entry into track racing for new entrants as well as experienced racers. The overwhelming response to the maiden season in 2021 is a testament to how the brand has successfully introduced a unique genre of motorcycle racing in India. In 2022, the format of the championship has been changed to a Pro-Am Series with 10 professional and 15 amateur riders competing together on the same grid. Organized in partnership with JK Tyre, the Continental GT Cup Season features at the JK Tyre FMSCI National Racing Championship.

The Continental GT250 was the first factory-built, production cafe racer and through the years has embodied the spirit of Pure Sport. Royal Enfield continues to retain everything under the skin of the Continental GT 650 stock motorcycle and has minimally modified the vehicle with a retro fairing, stiffer suspension, a more committed riding posture and stainless steel exhausts suited for track racing. This year, Harris Performance, who have more than 40 years of rich motorcycle racing experience, have enhanced the Continental GT-R650. With bespoke clip-on aluminium handlebars and rear set footpegs tailor made for the race-ready motorcycle, the Continental GT-R650 offers a one-of-a-kind retro racing experience. The track-spec Continental GT-R650 has minimalistic, yet purpose-built performance enhancements which offer an un-intimidating, agile and spirited performance on track. It also comes with enhanced braking components for the harsh track racing environment via means of sintered brake pads and brake callipers with insulated pistons. Furthermore, Royal Enfield has indigenously designed and developed the race fairings and belly pans at the UK Technology Center to adhere to FMSCI regulations and enhance racing comfort and aerodynamics (protecting the rider from wind blast).

The oldest motorcycle brand in continuous production, Royal Enfield has created beautifully crafted motorcycles since 1901. From its British roots, a manufacturing plant was established in Madras in 1955, a foothold from which Royal Enfield spearheaded the growth of India’s mid-sized two-wheeler segment. Royal Enfields are engaging, uncomplicated, accessible, and fun to ride; a vehicle for exploration and self-expression. It’s an approach the brand calls Pure Motorcycling.

Royal Enfield’s premium line-up includes the all-new Classic 350, the Meteor 350 cruiser, Interceptor 650 and Continental GT 650 twins, the Himalayan adventure tourer, and the iconic Bullet 350 and Classic 350 singles. Riders and a passionate community are fostered with a rich profusion of events at a local, regional and international level. Most notable are Rider Mania, an annual gathering of thousands of Royal Enfield enthusiasts in Goa, and Himalayan Odyssey, a yearly pilgrimage over some of the toughest terrain and highest mountain passes.

A division of Eicher Motors Limited, Royal Enfield operates through 1033 large format dealerships and 1038 studio stores in all major cities and towns in India and exports to over 60 countries around the globe. The company’s two state-of-the-art production facilities are located at Oragadam and Vallam Vadagal, near Chennai. Royal Enfield recently invested in two world-class technical centers, in Bruntingthorpe, UK, and Chennai, India, and in 2020 opened its first assembly unit outside India, in Buenos Aires, Argentina. With more than 17% growth year-on-year for the last 5 years and sales in international markets up 96% in 2019-20, Royal Enfield is the leader in the global mid-size motorcycle market.