SHOETECH – the leather and footwear component industry exhibition hosted by IFCOMA and ISF – will be held on 22nd and 23rd July in Vellore.

The Government is investing into infrastructure through the Indian Footwear and Leather Development programme, that began in 2021.

SHOETCH Vellore will have 98 exhibitors and 119 stalls and expect around 1,000 visitors.

International brands – Clarks, Skechers, Marks & Spencers, among others are expected to attend the event

20th July 2022 Chennai: India is the second largest producer of footwear and leather garments in the world. The leather products and footwear industry have been seeing robust growth across the last two quarters as India continues its economic rise after the pandemic. This has come about due to reduced dependence on China, a global giant in the industry, the increasing productivity of Indian factories; the raw material that Indian has; the infrastructure that is being created and major investment by the Government in skilling programs.

There was an increase of 19.24% in exports in the leather, leather products and footwear in the last quarter of 2021-’22.

To harness this potential and exhibit the industry’s abilities to the world market, the Indian Footwear Components Manufacturers Association (IFCOMA) and the Indian Shoe Federation (ISF) are organizing the next edition of their flagship exhibition, SHOETECH, on July 22nd and 23rd July ’22 in Vellore at the Ramani Shankar Mahal.

There is a sizeable domestic market in India for components, but Indian shoe components only form 50% of their purchases as most of the sourcing is currently being done from Italy, Spain and Korea. IFCOMA and ISF expects there to be a greater demand from the domestic markets as an outcome of holding these pan-India exhibitions. 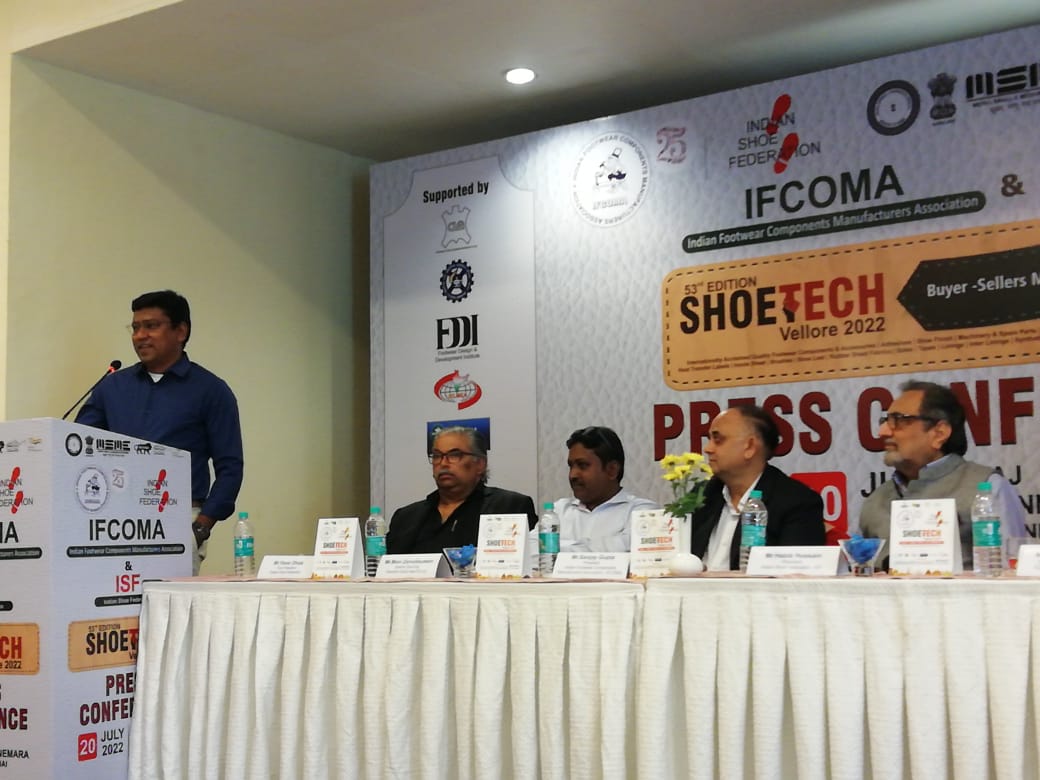 At the Press Conference, Mr Habib Hussain – President, Indian Shoe Federation said, “The Footwear and the Component industries must work together to create a Supply Chain which has unbeatable turnaround times through digitisation, skilling up of the workforce and the adoption of Globally Integrated Production and Information Systems. Our Governments at the State and Centre are also being proactive. An example of this is the direct involvement of the Honourable Chief Minister of Tamil Nadu, Thiru M K Stalin, in granting approvals for one of the largest footwear makers in the world, Hong Fu from Taiwan who have factories all over Asia. Also, the Tamil Nadu Government has recently declared Ambur as an export hub for leather footwear.”

“To make the most of this growth, IFCOMA has sought help from the Government to conduct a component sector survey and explore the possibility of joint ventures with Spanish, Taiwanese and Italian companies for specific components that are presently being imported. We also seek support in terms of the Integrated Leather Development Scheme (IDLS) by way of subsidy on plant & machinery,” said Mr. Sanjay Gupta, President – Indian Footwear Components Manufacturers Association. 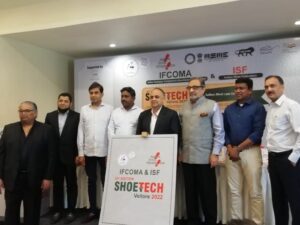 Mr. Israr Mecca, Regional Chairman – Council for Leather Exports, Southern Region said, “the footwear sector needs to scale-up to meet the growing requirements. Considering this, the Council for Leather Exports has requested the Government to extend the Production Linked Incentive Scheme (PLI) to the leather, leather products and footwear sector. PLI will be a game changer for the industry and will help in attracting domestic and overseas investments.”

“Among the key challenges India needs to tackle are its lack of infrastructure for components manufacture to cope up with global demands, a shortage of sole mould shops and the need to have a bigger pool of competent talent. Addressing these promptly would raise the profile of India in this unprecedented time for the sourcing market,” said Mr. J. Suresh Kumar, Director, Country Manager – Clarks India Services Pvt. Ltd

“For Skechers, we see the supply of Polyurethane (PU) as a possible constraint. It is encouraging to see material and component manufacturer are eager to produce required product for Sports shoes in India itself, but we need to match the technology/quality standards to Brands requirement which is again a challenge. India is keen to establish BIS Certification on Imports and it is a golden opportunity for us to develop our component sector,” said Mr. Moin Zainullauddin, Director Sourcing, Skechers South Asia Pvt Ltd.

Mr. Erik Illig, Managing Director -Wilhelm Textiles, India said, “The huge investment in infrastructures of the current government will surely reflect very soon. The availability of a resilient and capable supply chain and manpower makes further growth sustainable. The availability of a good local raw material supply chain allows shoe factories to react faster and more flexible to the demand of the market, as compared to other countries, which are depending on Imports.”

“In these exciting times for the industry, we are holding SHOETECH exhibitions across the country to showcase to the domestic market and the world our range of products. SHOETCH Vellore will have 98 exhibitors and 119 stalls and we expect around 1,000 visitors over these two days from within and outside India. International brands like Clarks, Marks & Spencers, Timberland and Kickers France are among the brands / buyers who will be attending. We expect SHOETECH to boost our efforts to make India the biggest sourcing hub in the world,” said Mr. Yavar Dhala – Vice President, Indian Shoe Federation.

Started in 1992, the Indian Shoe Federation (ISF) features many leading manufacturers and exporters of footwear and footwear components from India as its members. In addition to helping its members to constantly upgrade technology, use best materials and skill, maintain strict quality control and fine tune customer orientation, the ISF co-ordinates with the Government in overcoming procedural and policy bottlenecks for smooth conduct of the business. The ISF is committed to promoting the growth of the Indian Footwear Industry globally through the adoption of modern, transparent and superior industry practices.