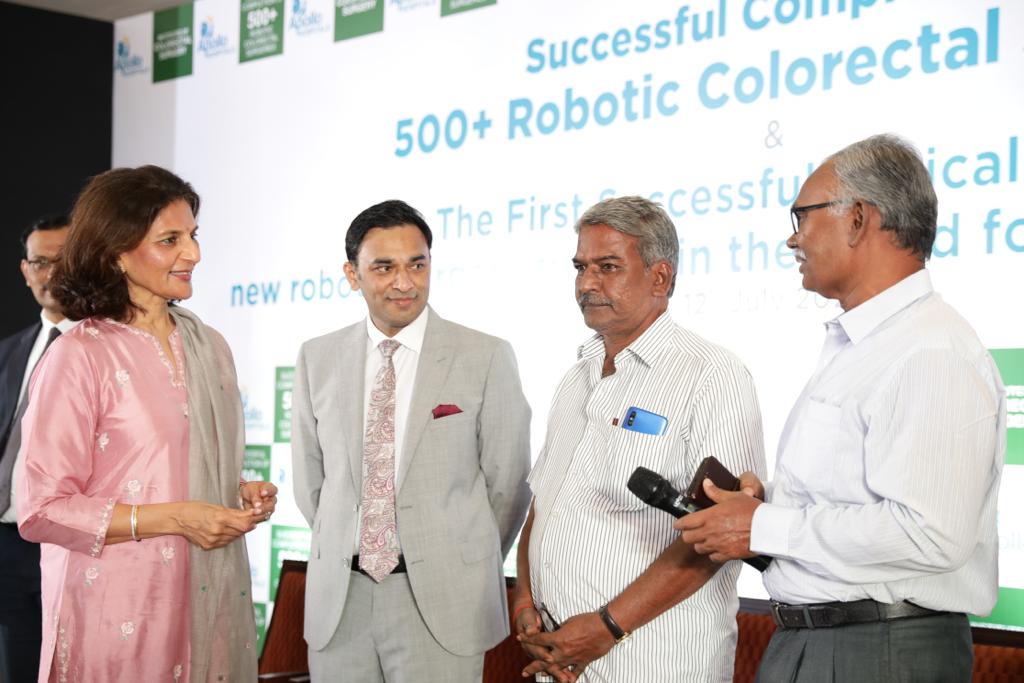 The rate of colorectal cancer has been increasing among young adults in their 20s to 40s over the last two decades. If colorectal cancer is identified in the early stages it can be completely cured and Robotic Colorectal Surgery helps patients avoid colostomy and lead a normal life. Colorectal cancer is a common cancer globally but has a low reported incidence in India with GLOBOCAN 2018 ranking colon cancer 13th in terms of incidence and mortality with 27,605 new cases and 19,548 deaths annually. Since 2018, 27,605 new cases have been registered across India and the total number of patients living with the disease in India is estimated to be around 53,700. Colorectal cancer is on the rise especially among young Asian males with unhealthy lifestyle patterns one of the key reasons for its occurrence.

Ms. Preetha Reddy, Executive Vice Chairperson, Apollo Hospitals Group said, “At Apollo, we are bringing in cutting edge medical technology, representing the next era of healthcare innovation to treat cancers. In 2016, we started a specialised department for Colorectal Surgery and also simultaneously started Robotic Colorectal Surgery. This has led to precision surgery that causes minimal side-effects in patients. Over the last few years, there have been several advances in minimally invasive techniques such as Robotic Colorectal Surgery, which has led to significant change in the management of colorectal diseases, particularly for rectal cancer surgery.”

She added, “Being one of India’s first dedicated centres for management of diseases of the colon, rectum and anus, the Institute offers Robotic & Laparoscopic Colorectal Surgery for Colorectal Cancer and cutting-edge treatments in Proctology and Pelvic Floor Diseases. The Robotic Colorectal Surgery Programme is the busiest in the country with over 530 robotic colorectal surgeries completed since its opening in 2016, of which 500+ have been performed by Dr. Venkatesh Munikrishnan and his team, who holds the distinction of being the highest volume robotic colorectal surgeon in the country.

Dr. Venkatesh Munikrishnan, Consultant Colorectal & Robotic Surgeon, Apollo Hospitals, Chennai, highlighted the importance of early diagnosis and its impact on the patients’ recovery, he said, “A matter of concern has been the rise in patients coming with late-stage cancer to the hospital. There is an urgent need to educate the patients to prevent this ‘stage migration’ of the cancer from the early stages I and II when it is easy to treat, to stages III and IV, when recovery can be challenging. It is important for people to be aware and identify symptoms early so they can get appropriate care. There is an urgent need to create awareness as symptoms of colorectal cancer and benign conditions such as haemorrhoids are similar.”

It was in 1983, that Dr Prathap C Reddy made a pioneering endeavour by launching India’s first corporate hospital – Apollo Hospitals in Chennai. Now, as Asia’s foremost trusted integrated healthcare group, its presence includes over 12,000 beds across 72 Hospitals and 4100 pharmacies, over 120 Primary Care clinics and 650 Diagnostic centres, 700 plus Teleclinics, over 15 medical education centres and a Research Foundation with a focus on global Clinical Trials. The most recent investment was the commissioning of South East Asia’s very first Proton Therapy Centre in Chennai.
Every four days, the Apollo Hospitals Group touches a million lives, in its mission to bring healthcare of international standards within the reach of every individual. In a rare honour, the Government of India had issued a commemorative stamp in recognition of Apollo’s contribution, the first for a healthcare organization. Apollo Hospitals Chairman, Dr Prathap C Reddy, was conferred with the prestigious Padma Vibhushan in 2010. For 38 years, the Apollo Hospitals Group has continuously excelled and maintained leadership in medical innovation, world-class clinical services and cutting-edge technology. Its hospitals are consistently ranked amongst the best hospitals in the country for advanced medical services.