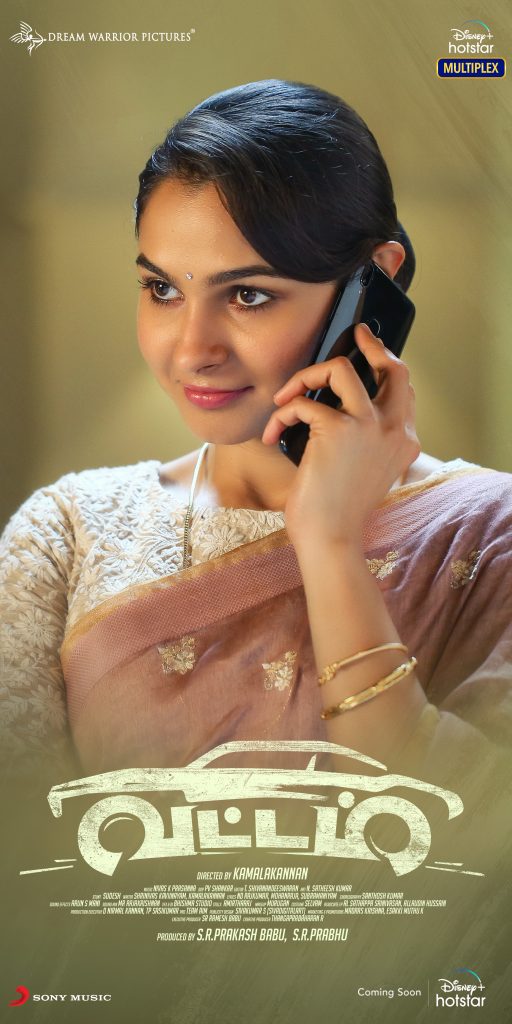 Following the phenomenal response to Nayanthara’s O2 & Kamal Haasan’s Vikram, Disney+ Hotstar has announced the premiere of its next outing titled ‘Vattam’ featuring Sibiraj in the lead role. Kamalakannan has directed this movie, and SR Prakash Babu & SR Prabhu of Dream Warrior Pictures have produced it.

Vattam, an edge-of-seat thriller, revolves around a bunch of characters – Mano, Ramanujam, Gautham, and Paru, who experience turbulent series of events in a span of 24 hours that changes their lives and perception about life forever.

Actor Sibiraj says, “Vattam is an important film in my career as it marks my first association with the prestigious Dream Warrior Pictures. I have always admired Mr. S.R. Prabhu and Mr. S.R. Prakash for their passion for cinema and their constant quest for selecting unique content and delivering the same in top-notch quality. The fact that Vattam is written by Mr. Srinivas Kavinayam of Soodhu Kavvum fame and directed by Mr. Kamalakannan of Madhu Bana Kadai fame excited me even further as I enjoyed the freshness and quirkiness of both these films. I would say, Vattam has fulfilled my long-run desire of playing a simple boy-to-next-door character. I play Mano, a happy-go-lucky chap who never feeds himself with big ambitions and loves to live the moment. Although I am the protagonist, the movie has equal importance for the other characters, especially the ones played by Andrea Jeremiah & Athulya Ravi.”

Director Kamalakannan says, “The place of hopping on and off always remains the same for a Giant wheel. Similarly, our everyday day lives begin in the same usual way. We travel across the same route, meet the same people, carry the same ideas, perform the same tasks, and the day ends, only to repeat the same pattern. A small change in these patterns can turn a day upside down, make us question our entire habits, and urge us to look back at our lives. And when we reach the same point to get down as with a Giant wheel, we can see a huge transformation within, including our habits. It will be the core premise of Vattam movie, where audiences will have a top-speed Giant wheel experience with questions of whys and wherefores about the drama. Vattam is one such story where life of a bunch of people, totally alien to each other, crosses paths, and in a span of 24 hours, their life and perspective towards life changes.”

Disney+ Hotstar (erstwhile Hotstar) is India’s leading streaming platform that has changed the way Indians watch their entertainment – from their favorite TV shows and movies to sporting extravaganzas. With the widest range of content in India, Disney+ Hotstar offers more than 100,000 hours of TV Shows and Movies in 8 languages and coverage of every major global sporting event.