22 June ’22, Chennai: FICCI FLO, the women’s wing of the Federation of Indian Chambers of Commerce & Industry,hosted  afireside chat with actor/producer R. Madhavanat an event titled ‘Reinventing your personal brand’ held at the Crowne Plazas this evening.

“In his journey from an actor to a director to a producer, R. Madhavan has learnt a lot of valuable lessons. Reinventing his personal brand is something that has come easily to Madhavanover the years and we at FICCI FLO are fortunate to be able to learn from an expert practitioner of the art, this evening,” said Prasanna Vasanadu, Chairperson, FICCI FLO, Chennai chapter,in her welcome address. 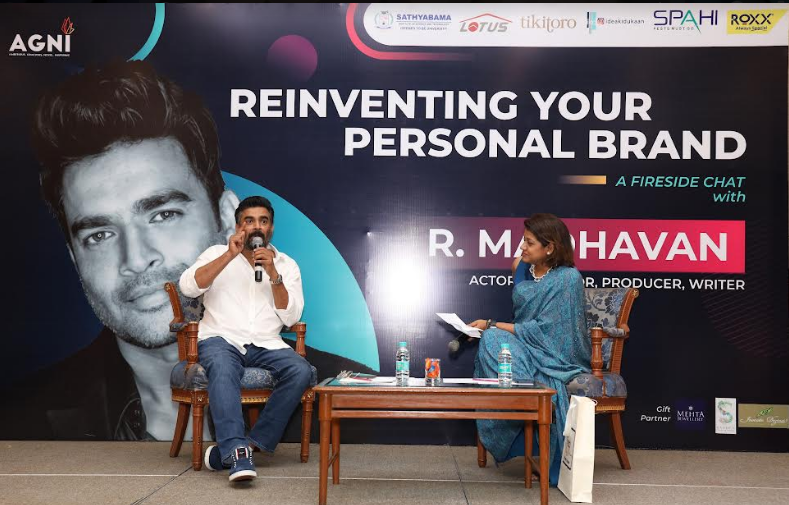 Mr. Madhavanspoke on the topic while weaving his experience as a first-time film producer on such a prestigious project into the narrative.He said that doing the promotional tour his movie,’Rocketry’ was exhausting having visited 14 cities in the last 9 days but that his passion for the movie is what keeps him going. He also dwelt in depth on what it was that inspired him to make a movie on the powerful story of Dr.Nambi Narayanan who, he feels, is an Indian patriot like almost none other.

“I don’t think anyone in the world has the luxury today of not having to adapt or to reinvent themselves; if you are in a career, reinventing yourself is extraordinarily important. The ability to adapt and reinvent is to ensure that you continue to be relevant and not get into a comfort zone and become isolated,” Madhavanresponded to a question on the importance of adapting and reinventing ourselves.

“We are vastly underestimating the impact of technology in our lives. If we are not able to adapt, or reinvent ourselves using the technology, then we will have to be prepared to jump off the bandwagon. I am a student of adaption and reinvention; the only reason I have been able to survive for 20 years in the industry without a godfather is because I believe I havethe ability to change,” he added.

There was a freewheeling Q&A session with Madhavanwith questions coming in from the audience on his storied career in films, and in particular, his experience as a producer when he made ‘Rocketry’. The session was moderated by Ms. Shakti Girish, Chief Editor and Creative Head of Gallata Media.