Salliyargal is a movie produced by Kalaimamani Sethu Karunaas & Pa.Karikalan of ICW, which is directed by ‘Methagu’ fame Kittu, and this movie marks his second outing.

Actress Sathya Devi is playing the titular character as Doctor Nandini in this movie. Karunaas plays her father’s role, Kalavani fame Thirumurugan as Army Villain, and Mahendran as Chembian. Furthermore, there are many newcomers in this movie.
Kaviperarsu Vairamuthu has written lyrics for this film, which features musical score by Karunaas’ son Ken and his close friend Eeswar.

The audio and trailer launch of this movie was held this morning that was attended by eminent personalities from Tamil political world and film industry.

Director Vetrimaaran said, “It really needs lots of guts and courage to make a movie that is based on real incidents. It needs much more courage to produce a movie like this. Both director Kittu and producer Karunaas together have achieved it. Director Kittu has improved a lot after his debut outing ‘Methagu’. The film’s background score is going to be one of the major attractions in this movie.”

Later the film’s songs and trailer were screened for the special invitees. Director Kittu invited the guests of honours, cast and crewmember of this movie to the stage and honoured them.

Actress Sathya Devi said, “I believe that I have done what director Kittu wanted me to do.”

Appreciating the hard work of actress Sathya Devi, director Kittu said, “She resigned her well-going job at TCS, and decided to act in this movie. She was involved in the one and half months of rehearsal for this movie. Since she plays the role of a doctor, she was imparted instructions from the doctors and surgeons. She even went to such an extreme of preparing for this role by buying leg piece and doing stiches to prepare for the role of a surgeon. She got into the shoes of this character completely.”

Actor Mahendran said, “I am the same one from the film ‘Naan Mahaan Alla. However, Kittu has completely changed me. I have been acting in aggressive roles, but he made sure that my eyebrows are not raised even for single reaction. I took special training for these nearly one and half months. He has taken so much of efforts to train me for this character.”

Ken Karunaas, who enthralled everyone with his colossal performance in the movie Asuran, has composed music for this movie. He said, “My friend Eeswar is the main composer for this movie, and I am just a supporting aid to him. Initially, I didn’t understand anything about the movie Salliyargal. Maybe this is because of generation gap. It nearly took a month to understand the complete premise of this movie. It’s a tough task to work with director Kittu. Later, we inhaled the concept of this movie and started composing music. Thirumurugan plays the role of a Srilankan Army, but he completely wept during the screening of this movie.”

Music director Eeswar said, “My interest and passion towards music is very well known by Ken. He asked me to leave the existing job and compose music for this movie. I thank Karunaas uncle and director Kittu for introducing me as music director with this movie.”

Director Kittu invited villain actor Thirumurugan and said, “When he got into the project, he completely transformed the project to a greater extent by getting involved in the script works, thereby adding more intensity to the project.

Actor Thirumurugan, who later spoke added, “So far, I have worked as script writer and co-director for many successful movies, but none of them have openly given credits for me. I have deeply wept and felt the pain of those suffering souls in Eelam. In contrast, I have played someone, who tortures them as antagonist in this movie. After watching one particular scene performed by Karunaas, tears started rolling uncontrollably. I am sure, every audience will experience the same while watching this movie.”

Director Seenu Ramasamy said, “The ones without homeland will definitely appreciate Karunaas and Kittu for their earnest efforts. Being a doctor itself is a big challenge. In particular, doing that medical service in the land of war, death, and bloodshed is much more critical. I am so glad that Karunaas and Kittu have paid their tribute for those doctors through this movie. I thank them for their beautiful gesture.”

Director Kittu is really a big talent for having made the entire film in just 23 days. There’s a difference between being popular and getting adored. Karunaas belongs to the second category. Karunaas has now scaled greater heights, and his domain is getting expanded. If the makers are able to include me for the promotional activities, I will definitely give my best and do my part.”

Former Member of Parliament Subbulakshmi Jagadeesan said, “As soon as I heard the film’s director name, my memories with Kittu anna were rekindled. This movie will let us revisit the olden days. I was involved in the treatment of women warriors, who were injured in the Eelam war during 80s. This movie recreates those memories for me.

When Indira Gandhi was the Prime Minister of India, she was keenly working towards giving separate land for Eelam just like how she separated India from Bangladesh. However, her shocking demise changed everything. Her son Rajeev Gandhi also worked towards the same mission, but due to some selfish miscreants here, he was deviated from this plan as these people believed that separating Eelam would result in same with Tamil Nadu as well. This has made the dream of Eelam land unfulfilled till the date. The knowledge and awareness about Tamil History remains unnoticed till now. Movies like this will shed lights on this subject. I am ready to get this movie released across all the regions.”

Director Ramnath Pazhanikumar said, “I have known the film’s music director Ken when he was an infant baby. I was doubtful whether he would agree to compose music for this film. I am surprised to see him compose music for such an intense movie at this early stage of his life. Director Kittu got involved in scrutinizing research works before penning script for this movie. If actor Karunaas is associating with someone, we can be assured that the respective person has got a good talent.”

Actor Sethu Karunaas said, “Four days ago, I received a call from director Kittu, when I was in Dubai that it would be apt to release this film’s audio on the special occasion of Maaveerar Birthday. This event was planned and scheduled in such a small span. I have introduced my son’s friend Eeswar as the music director with this movie. My son has worked with him in the musical part as well. However, I want my son to become a best actor. And now I feel, it’s best to cultivate all the talents so that it would be useful for the future times.

I feel privileged to mention an important thing here. In Tamil Nadu, students graduating from Visual Communication don’t get proper exposure. Around 2500 students are graduating every year, the Production Council that is supposed to nurture and utilize their talents aren’t even showing up for them.

Since 1985, I have been relentlessly working for the betterment of lives among the Eelam Tamilians. I feel proud to have provided education to 153 Eelam Refugee students. Today, they are very well settled with perfect job and are even making their best in foreign countries. I have created such a structure and would like to hand it over to youngsters like Ken and Eeswar. They will take care of it. This is my vision, and I am ready even to beg for raising funds to accomplish it.”
Besides, the other celebrities present for the occasion were Kolathur Mani, Pae. Maniyarasan, Thirumurugan Gandhi, K.S. Radhakrishnan, and others. 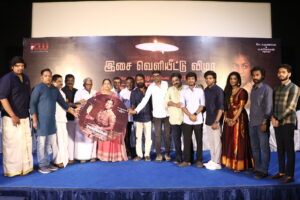