Delhi, September 13, 2022: Royal Enfield is all set for an adrenaline filled race weekend with the highly anticipated season 2 of the JK Tyre presents Royal Enfield Continental GT Cup 2022.  In line with its ‘Pure Sport’ philosophy, Royal Enfield Continental GT Cup is a unique racing format in India aimed at building accessible entry into track-racing for new entrants as well as experienced racers. A final grid of 25 racers qualified for the races, including 10 professional and 15 amateurs under this year’s ‘Pro-Am Series’ format, with Anish Shetty ready to defend his Championship title from the previous season. The rider selection this year indicates a close competition between the shortlisted racers, and will witness some nail-biting racing action in the first round of the season on  September 15-18, 2022. 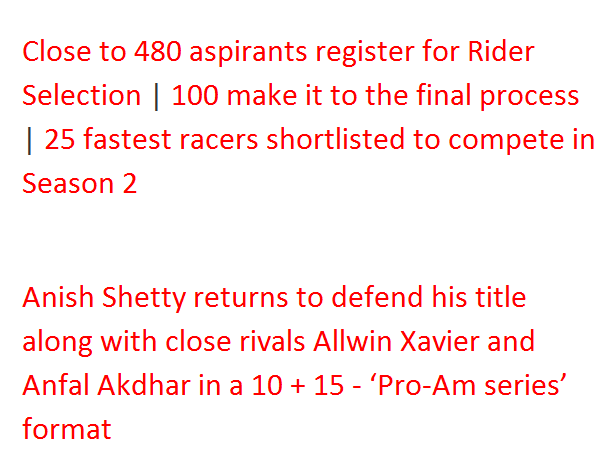 This all-new season witnessed participation from racers across the country exuding their passion for motorcycling and a testament to the growing popularity of motorsports in India. With over 70 percent of shortlisted candidates hailing from Southern India, the final selection round saw highest participation from Tamil Nadu.

Season 1 champion Anish Shetty is back with his closest competition from last year, Allwin Xavier, and they will be accompanied by 21-year-old Anfal Akdhar, the youngest racer among the lot, competing under ‘Professional’ category. Another interesting contender is Naresh Shobha Kaname, from Latur, Maharashtra, a farmer and mechanical engineer by profession, is also a passionate racer, who will be showcasing his racing skills on track. He will be competing against another 21-year old BBA aspirant – Reddy Manvinth, amongst other racers, proving that passion for motorsport goes beyond one’s age or background.

About Royal Enfield
The oldest motorcycle brand in continuous production, Royal Enfield has created beautifully crafted motorcycles since 1901. From its British roots, a manufacturing plant was established in Madras in 1955, a foothold from which Royal Enfield spearheaded the growth of India’s mid-sized two-wheeler segment. Royal Enfields are engaging, uncomplicated, accessible, and fun to ride; a vehicle for exploration and self-expression. It’s an approach the brand calls Pure Motorcycling.

Royal Enfield’s premium line-up includes the recently launched, stylish new Hunter 350, the timeless Classic 350, the Meteor 350 cruiser, the 650 parallel twin motorcycles – Interceptor and Continental GT, the adventure motorcycles – Himalayan adventure tourer and the Scram 411 ADV Crossover, and the iconic Bullet 350. Riders and a passionate community are fostered with a rich profusion of events at a local, regional and international level. Most notable are Rider Mania, an annual gathering of thousands of Royal Enfield enthusiasts in Goa, and Himalayan Odyssey, a yearly pilgrimage over some of the toughest terrain and highest mountain passes.

A division of Eicher Motors Limited, Royal Enfield operates through more than 2100 stores across all major cities and towns in India and through nearly 850 stores in more than 60 countries around the globe. Royal Enfield also has two world-class technical centres, in Bruntingthorpe, UK, and in Chennai, India. The company’s two state-of-the-art production facilities are located at Oragadam and Vallam Vadagal, near Chennai. Across the world, Royal Enfield has three modern CKD assembly facilities in Thailand, Argentina and Colombia. With more than 37% CAGR for the last 5 years and sales in international markets up 108% in 2021-22, Royal Enfield is the leader in the global mid-size motorcycle market.